I'm reflecting back on my run for Ben today.  Honestly, the first thing that comes to mind when I think back on that day is the fact that it was, hands down, the hardest race of my life.  You name it, it happened.  Rain, hail, thunder, lightening.  And best of all...the race was entirely up hill.  No really.  Entirely up hill.

I was writing this race reflection in my mind the entire time that I was running.  I felt like I was having a dialog with Ben the whole time I was out there.  Reacting and jumping to every clap of thunder.  Wiping away the rain from my eyes.  Shielding myself from the hail.  "This sucks, Ben."  I was saying in my head.  "I can't believe they didn't call this race off.  This isn't even close to safe."  A car drove past me on one stretch, splashing me from a puddle as they went.  I felt the curse words rise in my throat when suddenly they were replaced with laughter.  I shook my head, laughed out loud, and spoke to Ben again.  "You better appreciate this birthday present buddy!"

I ran for Ben on his birthday.  Stars aligned and some how, I was able to find a road race on his birthday, which fell on a Thursday.  In what universe does someone plan a road race mid week?  It never happens.  And the fact that there was one for me to run, makes me believe that I had a little extra help, yet again.

I almost gave up that day.  I almost didn't run.  No one would have blamed me for rescheduling- that night was a bear.  But then I thought, "I bet the Wheelers have days where they would just love to give up.  I bet they have days where they don't feel like they can fight another battle."  But they do.  The Wheelers have dedicated their lives to making Ben's story impact the world.  To working towards a world where parents never have to say goodbye to their children ever again for a reason like this.  Have you ever heard them speak?  They are incredible.  They are so moving and so strong that you just know that they are driven by something incredibly powerful.  And you don't doubt for a second that Ben sits behind them, encouraging and pushing them to fight another day.  Helping them to right this wrong in whatever way is possible.

Every clap of thunder and each bolt of lightening that night felt like a battle cry.  It felt like a deep roar of victory.  A reminder that there is a movement happening right now that will make this world a better place.  A safer place for our children. And it pushed me on to battle for one more step up that mountain.

People like the Wheelers are leading a charge and I cannot even begin to express my gratitude to them for the strength and resilience that they show us all every single day.  Thinking about what they battle every day....well.  That makes a silly little hill in the rain look pitiful.  And I'm in awe of them and their fighting spirit.

Ben.  You have incredible parents that will continue to fight for you every day for the rest of their lives.  You are being honored by them and your community will stand shoulder to shoulder with them every step of the way as they persevere.   Thank you for holding my hand that day and running along my side.  I never would have made it had you not laughed along with me as I ran.

P.S- I had a brownie in your honor that night when I got home.  Your dad told me that they are your favorite.  XOXO

Here is Benjamin Wheeler.  The 19th angel I have now run for. 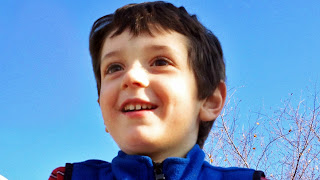