A few months back, my good friend Jessica reached out to me.  She knew about my 26 races in 2013 for Sandy Hook and had a suggestion for me of a race to run.  A year ago her brother in law, Chief Michael Maloney of the Greenland NH Police Department, was killed in the line of duty protecting his beloved town.  The town was rocked, so similarly to Newtown, at his death.  Nothing like this had ever happened in Greenland and Chief Maloney's friends and family members were left trying to decide on the best way to honor his memory.  They created the Chief Michael Maloney Memorial Fund, Inc. and began hosting a memorial run that took its participants from the Portsmouth Police Department to the Greenland Police department in a show of unity.

The memorial fund that the proceeds from the race go towards provides relief for the distressed members, spouses and children of New England Public Safety members who have been killed or injured in the line of duty.  And relief may take the form of direct financial assistance to the victim or victim’s survivors, including but not limited to, educational and vocational assistance.

When Jess approached me about doing this race, I immediately knew that it was something that I would want to participate in.  It would be an honor to race for Chief Maloney's memory as well as the memory of a beloved member of the Newtown community all on the same day.  I started to research a bit into the families of the Newtown victims.  I wanted to see if any of the families had a strong connection to law enforcement, because it just seemed fitting to pair up the this particular race that way.  Only a brief few minutes into my research, did a thought dawn on me.  What better way to honor Chief Maloney than to run in his honor as well as in appreciation of my own town's police officers and first responders?  Hadn't they lost something that day as well?  Hadn't they given a part of themselves away that day?  They deserved to be recognized by this project as well.

I called on my angel support team, the three amazing women in my life that have created all my race t-shirts, and asked them for one last favor.  To see if they could they create one additional t-shirt for me.  One that honored the first responders of Sandy Hook.  They delivered in record time and the honorary 27th race was set.

Race day was a beautiful day.  Sunny and warm and it felt amazing to be outside taking advantage of it.  Because the race was dedicated in memory to a police officer, there were members of police departments from all over the state running in teams together.  Police escorts riding on motorcycles at the front of the pact.  Police officers lining the course.  It was truly amazing to see that kind of support and unity.  It makes you realize that they aren't just police offices.  They are a brother/sisterhood.  They treat each other from other departments as one of their own.  And just because Chief Maloney wasn't an office from their particular department, doesn't mean that they don't feel his loss just as deeply.  The outpouring of love and support was evident that day.  And I'm sure that the members of the Greenland PD felt that from all those around them.

I've witnessed this type of unity before.  In Newtown, in the months following December 14th, my husband and I were out driving around town one day when we happened to notice a Westport police cruiser stationed at a light.  Down the road further still, we noticed a Danbury police cruiser.  Then one from Monroe.

"What the heck is going on?" I had asked my husband.  I was worried that some other tragedy had taken place in town and that reinforcements had been called in from surrounding towns to help.

If you don't get the warm tingly's from what I'm about to tell you, then I don't know what else to say.  I should just shut down this blog right now.

It turns out that following December 14th, many of first responders- Newtown PD, our EMT's and others- were struggling to come to terms with what they had witnessed that horrific day.  Rightfully so.  Many of these brave public servants had maxed out their allotted time off to seek therapy and their much deserved time with their families to grieve and recover.  And what was happening was that police officers from the surrounding towns had volunteered themselves, free of charge, to cover some of the Newtown teams shifts so that they could take additional time off to recover with out being penalized.  Our neighboring town PD's also made sure that not one single Newtown police officer worked on Christmas.

When I heard that, my faith was restored in knowing that good will always out weigh the bad.  That there is an overwhelming number of people that would rather see good come to us than harm.  I get choked up just thinking about that.

So, don't forget your police department or your EMT's.  Bring them coffee one day.  Or just wave to them as you pass them on the street.  Their one responsibility on this Earth is to keep us safe.  It's a noble job and one that we take for granted in our communities far too often.  I will never forget them for what they sacrificed on December 14th.  A job needed to be done, and they did it.  And they will need time and our love and support in order to move past it.  We owe them at least that.

Thank you Newtown Police and EMT's.  We are behind you and are always here for you.  We love you.  And Chief Michael Maloney.  You are forever in our hearts.

Here are a few photo's from the first responder race:


Making friends with the Greenland PD.﻿ 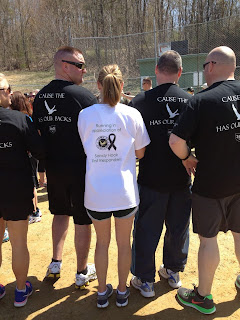 This is my friend Jessica and her Husband Tim.  Chief Maloney was Tim's brother. 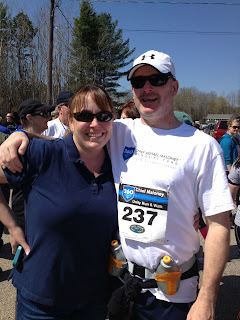 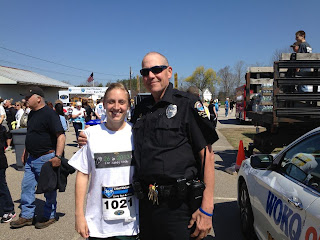