On May 19th, I ran the O'Neil's 5k to Benefit the Jesse Lewis Foundation in Norwalk, CT for the amazingly brave Jesse Lewis.

Jesse was six years old when he died at Sandy Hook.  Six years old.  Want to know what his final act on this planet was?  He was trying to lead other children to safety.  What six year old does that?  When shots rang out, he ran to the hallway to see what he could do to help.  He was six.  I can't get that through my mind.  Adults are one thing.  We are programmed to protect children.  But to have a child act on that instinct is something incredible.  What a strong young man.

The race day for Jesse was a cold and wet one for mid-May.  But heck if you would have known it.  People were out in droves to show their support for the Jesse's family.  Such a beautiful thing to see.  On a day where staying in bed curled up under the blankets watching movies would have been a far superior option, people ventured out to make sure that the Lewis family knew that we would forever stand beside them.  Regardless of the weather.

As I was walking towards O'Neils that morning on my way to sign in, a man at a local bakery popped his head out and asked me where everyone was headed to.  Apparently he noticed all the people out and about that wet morning and realized it was odd.  I told him that O'Neil's was putting on a race that benefited the Jesse Lewis foundation and that Jesse was one of the little boys that passed away on December 14th.  "God bless them."  He had said to me. And followed it up by saying, "What a strong community Newtown is.  We could all learn a thing or two from them about how to treat one another."  I couldn't have said it better myself.

The stories, like Jesse's, of heroism are endless.  The acts of kindness that followed in the wake of this tragedy, are too many to count.  The number of people looking to ensure those lost are never forgotten, are vast.   And I personally have turned a very significant corner.  In the wake of December 14th, if someone asked where I was from, I would hesitate.  I didn't want to see the look in their eyes when I told them that I was from Newtown.  I didn't want to see the pity.  Now?  I jump at the chance to tell you where I am from.  Because I'm working past the grief.  I'm seeing the good instead of the bad.  I am so beyond proud to be able to tell you that I am born and raised in Newtown because we have done everything right from the moment that horrible creature entered one of our beloved schools.  We have so much to be thankful for and our community will forever be impacted in the most positive way because of how we learned to come together and be there for each other through the worst possible scenario.  We are Newtown and we choose love every single day.

Here is the handsome Jesse Lewis.  The 13th angel that I have now run for. 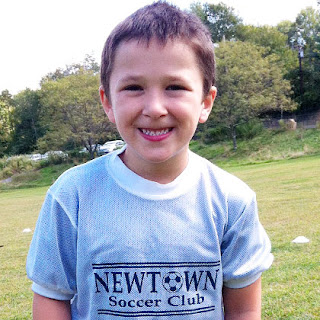 Full race album available on the facebook page 26 in 2013 for Sandy Hook: 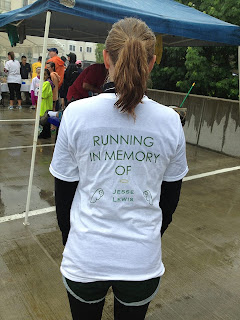